From the Brattleboro Reformer. Reproduced with permission by Chris Mays 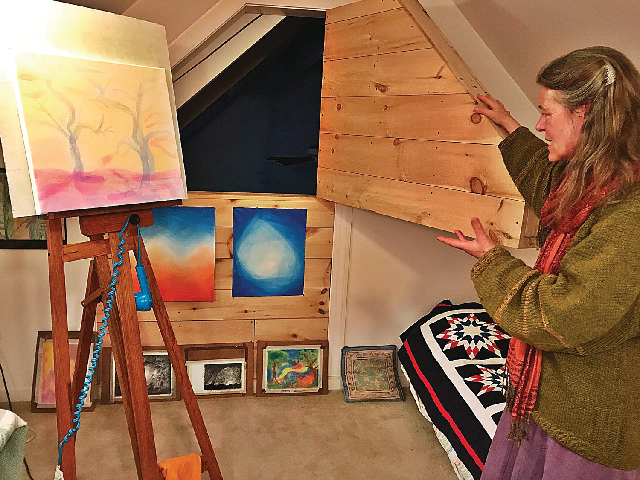 BROOKLINE — A nonprofit devoted to getting people off of psychotropic medications is committed to calling this small town home.

“It’s a really healing, very peaceful, energetically a very rich place,” said Beatrice Birch, founder of Inner Fire. “We have a beautiful brook that runs through the property and just the woods. It’s mostly woodland then we have an open field and some gardens. In order for people to get in touch with themselves, they need to get away from the business of society.”

Inner Fire was founded in 2013 and started in Brookline in 2015 with the sole purpose of saving lives “by offering the choice to avoid or taper safely off addictive psychotropic medications by engaging in proactive artistic therapies and physical, practical work in a supportive community.”

Programming includes art, speech and music therapy, cooking, housekeeping, massage and outdoor activities such as hiking and gardening. Participants also write biographical work and share in groups. They eat an organic diet high in fats and protein, with no sugar or wheat. The point is to create a rhythm to the days.

Birch chose Brookline as the site “because of the openness of the state.” She said Vermont welcomes new ideas and seems to be more a little more liberal than other places.

A press release recently announced that Inner Fire received state approval for construction of a brand new building that will serve as a 12-bed therapeutic and community residence. The Act 250 permit covers 26 Parker Road, property on which the nonprofit is already running operations.

The building will be “the Inner Fire home,” Birch said. Construction is expected to cost about $1 million.

So far, utilities and septic are set up, and trees have been removed.

The hope is to finish the east wing of the new building by July and offer beds to eight clients. Once all construction is complete, there will be beds for 12 clients. Currently, there are only six.

“We want it to be family-sized, multi-racial, multi-cultural, multi-generational,” Birch said. “The more diverse the better, I would say. What they have in common is they want to be active in reclaiming their lives.”

Suicide is the 11th leading cause of death in the United States, according to the press release and other sources.

“For too many people, antidepressants and other psychotropic, mind-altering medications avoid important issues by numbing and disconnecting the individuals from what makes them human: clear thinking, heartfelt feeling or directed willing,” the press release says. “Feelings of despair and isolation typically increase suicidal thoughts and actions. The impact suicide has on the lives of family members, friends, co-workers and the community is devastating. The loss of human potential is enormous.”

The goal is to expand to other locations in the future.

“The Brookline initiative is just the beginning of a movement aimed at deep healing,” the press release says.

Now, in its third year of operating, the organization has helped 14 “seekers” from all around the U.S. A year-long residency is recommended in most cases.

Birch calls clients “seekers.” She came up with the name after working for years as a volunteer in New York state prisons, where she would paint with inmates.

“I said, ‘It’s an art class but it’s really a spiritual class,'” Birch said, recounting a conversation with a man who had difficulties describing its impact. “He looked at me and said, ‘This is what I was looking for on the outside. ‘”

Birch said seekers want something that has depth and is not superficial, and painting provides more than just an aesthetically pleasing picture but a glimpse into the artist’s social life.

Birch remembers working at a rehab in Vermont, when a number of residents asked her if they had to take their prescribed medications. “Isn’t there a choice?” she recalls someone asking.

When the sixth person she knew committed suicide within a couple of years, and wanting to help people get off psychotropic medications, Birch said, “I just felt, enough.”

Inner Fire, she said, is about offering the choice for people to get off their medications and be proactive. She acknowledges that not everyone wants or needs to stop using their medications.

“What really interests me is the resilience of the human spirit,” she said. “Through my lifework, I see people are really creators and not victims. We all may feel a victim at times but we’re really creators and that’s how we deal with the challenges that come our way, which are so important.”

Birch hopes to create a “creative living community” in the Brattleboro area, where seekers would look for part-time or volunteer work with artists, craftspeople or tradespeople. This work would have the seekers practicing everything they learn at Inner Fire, she said.

“It’s not just a nice idea here,” she said. “We’re talking about living much more consciously, healthily and really balancing our lives. I guess I see psychosis as when we get stuck in our heads, where our thoughts go round and round. You need to ground people. People need to be grounded.”

In some instances, Birch has seen seekers who hear voices not hearing them when they are chopping wood. She said a greenhouse on a nearby hill was built by clients “all by hand.”

Seekers do not have any communication with family during the first three months of their stay at Inner Fire. In the last few months, they volunteer at community organizations or take courses.

A staff of about 20 to 21 full-time and part-time employees at Inner Fire includes therapists, a psychiatrist, and homeopath and anthroposophic physicians.

For now, all stays are privately funded. Birch said Inner Fire charges “half the cost of what the state pays per person at group homes.”

Inner Fire has created the Support A Seeker Fund to help those who cannot pay. The organization is also raising money for the construction project. More information can be found at innerfire.us/support.

“I’ve always felt if the universe wants this to happen, it will happen,” Birch said. “So far, we’ve just had so much support from all walks of life.”